Facial tumours of Tasmanian Devils are among the extremely rare cases of transmissible cancer and threaten the survival of this species. They are extremely interesting for medical research because they can be used to unravel new cancer molecular mechanisms and their interplay with the immune system. Scientists at the Center for Molecular Medicine (CeMM), the Vetmeduni Vienna and the MedUni Vienna have succeeded in using modern analysis methods to elucidate key molecular mechanisms that are crucial for the transferability of these cancer cells.

Tumours can usually only proliferate in the organism from which they originated. This is due to a large number of molecular security mechanisms with which the immune system repels and destroys foreign tissue. An exception to this is the Tasmanian Devil, the largest living carnivorous marsupial in the world: a deadly facial tumour has been spreading at a rapid pace for over two decades in this species.

How these cells escape the immune system of its recipient has long been a mystery. Now, the groups of Andreas Bergthaler (CeMM) and Richard Moriggl, head of the Ludwig Boltzmann Institute for Cancer Research and Professor of Functional Cancer Genomics at the Vetmeduni and MedUni Vienna,

found that certain receptor molecules on the surface of the cancer cells, ERBB receptors, have unusually high activity. The activation of these receptors influences the cell's epigenetic make-up via STAT3. As a result, the number of molecules that the immune system uses to recognize the cell is reduced, while cell division accelerates and factors for the metastasis of the tumour cells are increasingly produced. Furthermore, inhibiting the ERBB receptor with a specific drug can kill cancer cells in a targeted manner. This could play an important role in treating this communicable tumour before the Tasmanian Devil is completely eradicated. In addition, the basic biological principles of invasion and fixation in new tissues are of crucial importance, even in the case of non-communicable tumours, in particular cancer metastases. A better molecular understanding of these relatively exotic communicable tumours can provide important insights into the basic biological mechanisms of cancer. 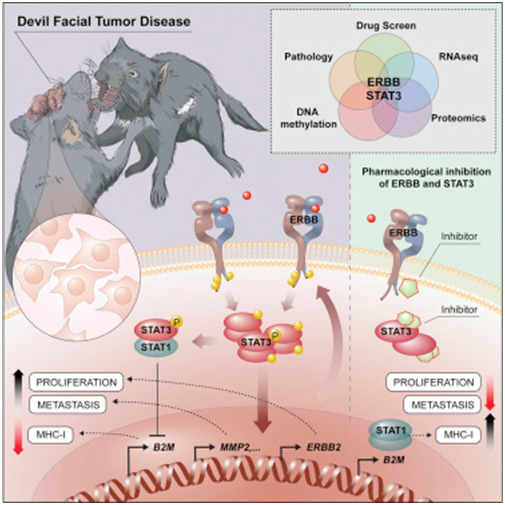