The liver is a crucial organ for the systemic metabolism in our body. In addition to the turnover of biomolecules and drug metabolism, the liver removes toxic substances from the organism. The liver is thus a central metabolic hub in a healthy organism, but is also a central organ in the immune defence against infections - previous studies have shown how immune cells improve the liver metabolism to fight pathogens or cancer. Based on this, the authors of the article now published in the journal Immunity examined these immune metabolic changes during viral infection of mice. In addition to the expected inflammatory changes, the authors identified strong changes in liver metabolism. They were able to show that many central metabolic pathways, including the urea cycle, are suppressed when an infection occurs. The antiviral cytokine type I interferon (IFN-I) was then identified as a regulator of the urea cycle - after removal of the receptor for IFN-I from the surface of hepatocytes, the metabolic changes were no longer observed. This was a surprising observation that shows that IFN-I influences important biological processes during an infection. The results shed a new light on how the body's immune system has developed to regulate liver metabolism so that it controls T cell responses while reducing collateral tissue damage during infection. 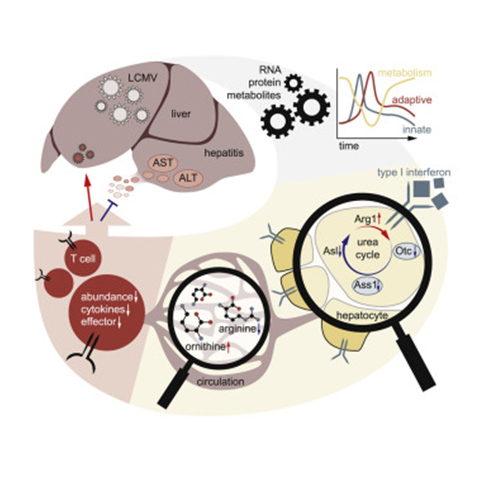